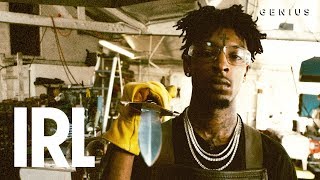 Atlanta rapper 21 Savage recently dropped his debut album, Issa Album, with just a few weeks’ notice. Coming off the breakout success of his Metro Boomin collaborative project Savage Mode, he’s looking to reach even greater heights with his proper solo debut. He linked up with Genius’ own Rob Markman at Sword and the Stone in Los Angeles to talk about his relationship with Sonny Digital, his experiences growing up in Atlanta, and his opinions on what really constitutes trap music.

Read all the lyrics to ‘Issa Album’ on Genius: https://genius.com/albums/21-savage/Issa-album

Who Is The GOAT Of Trap Music? Big Facts Clips