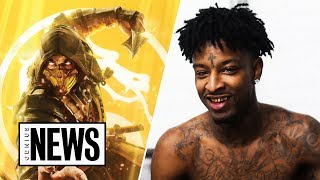 On October 31, 21 Savage released the full version of “Immortal,” a song which he first previewed last December in a ‘Mortal Kombat 11’ trailer. The track is produced by his frequent collaborator Kid Hazel and features the Atlanta rapper name-dropping several characters from the iconic video game franchise.

Read all the lyrics to “Immortal” on Genius: https://genius.com/21-savage-immortal-lyrics