by Admin
in Performers
5 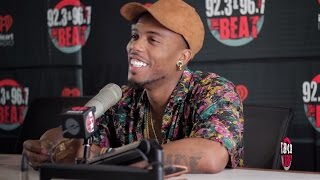 B.o.B. stopped by Hoodrich Radio to chop it up with DJ Scream about his new album ‘Ether’. He expresses his excitement for the release of his new project and says that because his music is fueled by real life experience, he has a lot to talk about and has never challenged himself so much lyrically.

Bob talks about the inspiration of ‘Ether’ as a follow up to his elemental mixtape series, which included ‘Earth’, ‘Fire’, ‘Air’, and ‘Water’ that was released last year. He explains the difference between his elements series which focused on social and political topics, and ‘Ether’, which focuses on a more personal and introspective subject matter.

He talks about the hard work behind the scenes that is required to be a successful artist in the industry and says that now as an independent artist he is just getting into the stride of being at his best musically. He talks about preparing for a 45 city tour, and hands Atlanta and Toronto the crowns for having the most beautiful women in the world.

Be on the lookout for B.o.B.’s upcoming BoBwood Fest taking place in Atlanta on August 19. His new album ‘Ether’ is out now!