How to make a 21 Savage Type Beat (FL Studio Tutorial) 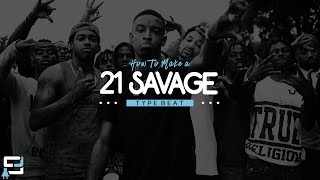 How to make a 21 Savage Type Beat (FL Studio Tutorial)

In this video i’ll be showing you how to make a simple 21 savage type beat.

21 Savage (Bio)
21 Savage (Bio)
ABOUT
Underground Atlanta rapper who released a debut project called The Slaughter Tape. He would later put out a follow up tape called Slaughter King.
BEFORE FAME
In the 7th grade, he was expelled from DeKalb County schools for gun possession. In 2013, his friend was murdered and he was shot six times. It was at this point that he turned to rap music.
TRIVIA
He collaborated on an EP with Metro Boomin called SavageBoomin.
FAMILY LIFE
His real name is Shayaa Joseph.
ASSOCIATED WITH
He dropped a tribute EP to Gucci Mane titled Free Guwop in July of 2015.