Mystikal Gets Offended at Vlad Implying He Doesn't Write All His Raps: "F*** You Mean?" (Part 15) 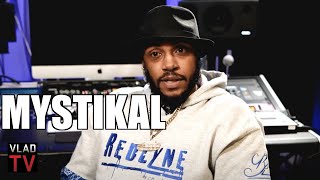 Mystikal Gets Offended at Vlad Implying He Doesn't Write All His Raps: "F*** You Mean?" (Part 15)

Part 16: https://youtu.be/XdKI-UEBqik
Part 14: https://youtu.be/U3zzSm5t1_Y
Part 1: https://youtu.be/axNLWutGdr0
——–
In this clip, Mystikal starts out by reacting to Vlad saying that he wrote “most” of the songs on the albums he’s been on, saying, “f*** you mean?” Vlad then pointed out Mystikal’s previous story about the hook already being written for “Danger,” and he stated that he wrote his own verses for all of his songs. Moving along, Mystikal admitted that he made some money mistakes along the way, and he joked about not being able to hold a “money phone” up to his ear. To hear more, including loving to entertain at live shows, hit the above clip.