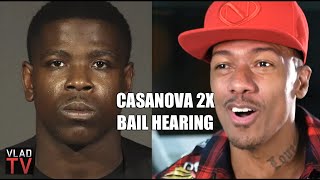 VladTV has obtained exclusive audio of Casanova 2X’s bail hearing, where prosecutors accused him of being a top member of the Untouchable Gorilla Stone Nation gang. Around the 8-minute mark, the federal prosecutor specifically mentioned an interview with Nick Cannon where Casanova claimed that he was “still ape” as proof that he wasn’t just a “celebrity ambassador” for the gang. The prosecutor brought the Nick Cannon interview claim up again around the 42-minute mark. The judge ultimately denied bail and ordered Casanova 2X to be detained until his trial, as he considered him a danger to the community.