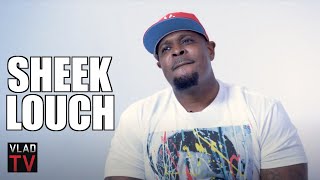 Part 11: https://youtu.be/Lnl5pGDNvyo
Part 9: https://youtu.be/I3BXU7Hldh8
Part 1: https://youtu.be/yNYIuJMsKhg
——–
In the latest clip, Sheek Louch spoke on The Lox’s past beefs with Roc-A-Fella Records and G-Unit. While Sheek couldn’t remember how the Roc-A-Fella beef started, he admitted that Beanie Sigel and State Property was the only crew that gave The Lox some lyrical competition. He recalled Jadakiss being so angry and wanting to escalate the beef to violence after Roc-A-Fella dissed them on Hot 97. However, Sheek said no violence occurred between the two crews and he was able to have separate conversations with Freeway and Memphis Bleek.

When speaking about the G-Unit beef, Sheek highlighted that him and Styles P were never dissed by 50 Cent because they didn’t do a song with Ja Rule. He also stated that 50’s crew wasn’t a lyrical threat to The Lox and claimed they carried on with the disses for so long because they felt like that’s what 50 would have done. Sheek added that the beef died down as New York rappers started to become more unified, leading The Lox member to say that he wished they had all done business together rather than beef.