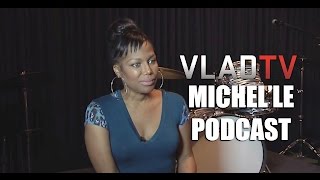 http://www.vladtv.com – Michel’le Toussaint was the leading lady of the Ruthless Records empire. Although it was short-lived, the South Central native has stories on end detailing her times with the N.W.A. crew, her relationships with Dr. Dre and Suge Knight, and the voice she didn’t realize she had until the second grade.

Michel’le has the singing voice of a goddess, though she speaks entirely different. For the first few years of her life she didn’t even talk, but the lonely bus rides she took at 13 resulted in her joyous return trips home after winning multiple talent shows. During our latest Vlad Couch podcast, Michel’le explains the difference between her talking and singing voice and how her exceptionally unique sound sprung a record deal.

During the interview Michel’le also speaks on the N****s With Attitude in great detail, being that she soon began dating Dr. Dre after he tried to get her attention for weeks. Michel’le says they became “very” serious after a short period of time and she “always looked for approval” from him when it came to almost anything since she “didn’t talk much.”

Listen on as Ms. Toussaint talks about her abusive relationship with her ex-fiance, how she wound up married to Suge Knight, and the infamous Dee Barnes incident before belting out “Let’s Play House” A Capella during episode 21 of The Vlad Couch.