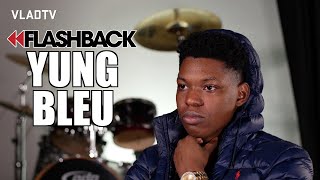 In this VladTV flashback from 2018, Yung Bleu spoke on potentially working with Peewee Longway. The rapper noted that the collaboration didn’t go through, unfortunately. From there, he spoke on Longway denying all of the questions he asked. Yung Bleu then got into an upcoming mixtape he plans on releasing and said that a bunch of rappers have been rocking with him, including NBA Youngboy. From there, Vlad mentioned Boosie’s “hypnotized with hatred” interview, which pushed Bleu to say that’s exactly what the situation was when he and his dad got shot at in Alabama.

The Lightskinkeisha Interview On Infinite Vibes