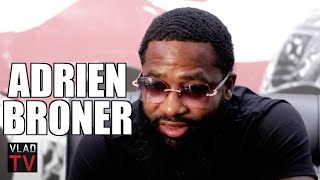 Part 21: https://youtu.be/-wIgxYQIdVw
Part 1: https://youtu.be/A0mKoYq5Khw
——–
In the final clip, Adrien Broner and DJ Vlad discuss the upcoming fight between Mike Tyson and Roy Jones Jr. When asked to make his pick, AB decided to stay neutral because both are two of his favorite fighters. Broner also stated that even though he plans on watching the fight, he doesn’t think it’s a good idea for Tyson and Jones due to their age and dangers of the sport. The clip concludes with Broner talking about his next album, “Still Adjusting to Fame,” and wanting $10 million for his next fight.