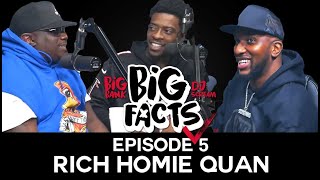 Rich Homie Quan stops by Big Facts with Big Bank & DJ Scream to talk about what he’s been up to and why he’s been out of the way. He talks about stepping back to refocus and get back to the basics with his creative process. He talks about having to be real with himself and check his ego which was getting in his way. He talks about things he would do differently on his path to success, which includes getting better entertainment lawyers and actually reading over the terms of his contracts before signing. He talks about getting back to the hunger that he possessed when he was fresh on the scene and finding new inspiration. He reveals having recorded about 12 tracks with Future but doesn’t know if they will come out.

Next, Rich Homie talks about the state of his relationship with Young Thug and if there is any chance that we will get new music from the two. He reveals that he would want to have a conversation first before jumping into new music, but that everything is all good between them. He credits ego as getting in the way of their friendship and admits that he still checks out and rocks with Thug’s new music. He reveals that he never did any paperwork with Birdman.

Quan talks about Atlanta sports and says he will bet against the Hawks. He talks about why he won’t leave Atlanta, and how his success resulted in lost relationships with a lot of day ones. He talks about being comfortable saying no. He talks about getting serious with rap around his 11th grade year, and his craziest direct message. He weighs in on his favorite artists coming up right now like Lil B, Da Baby, & Lil Guap. He talks 2020 bucket list, which includes writing a fiction book. He talks about how the streets and music industry collide, the price of fame, and what was really going on in his head when he created The Quan dance. He talks about the after-effects of his dance and how he realized people started taking him less seriously, how he really felt about Hit the Quan song, & how he gained crossover success but lost his core audience.

Next, Quan touches on his Tim Westwood freestyle, what his recording process looks like nowadays, his dream collaboration with Rihanna, his favorite past time of reading books, and what really happened when he couldn’t remember the lyrics to Notorious BIG’s Get Money lyrics during VH1’s Hip Hop Honors after being invited by Lil Kim just one day in advance. He talks about what’s coming next for him in 2020, including new music dropping during the first quarter. Check out his new project Coma out now!

Subscribe to Big Facts on All Podcast Platforms Now!
https://audioboom.com/channels/5013306

TK Kirkland Apologizes to Lil Wayne for Comments about Pardon: I Was Wrong (Part 3)

You Got Lambo Truck Money?

You Got Lambo Truck Money?