Boosie: I Got My First Gun at 14, But I was Shooting Guns Before Then (Part 5) 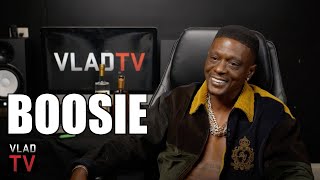 Boosie: I Got My First Gun at 14, But I was Shooting Guns Before Then (Part 5)

Part 6: https://youtu.be/urmhLqCmsDs
Part 4: https://youtu.be/q4zuF23RlI8
Part 1: https://youtu.be/_x_M6GveVXE
——–
In the latest clip, Boosie revealed he got his first gun at 14. He clarified that although it was his first gun, it wasn’t the first time he shot a gun. He said he grew up around guns and that his father would take him to shoot. In reference to a film scene DJ Vlad mentioned, Boosie talked about his 12-year-old cousin getting shot and staying in the hospital for 16 months. He also confirmed his son played a younger version of him in “My Struggle.” Check out the above clip to hear more.

Famous Dex & Rich The Kid – Off The Lot [Official Audio]