by Admin
in Performers
6 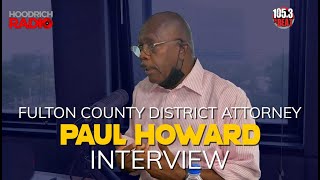 Fulton County District Attorney Paul Howard stops by HoodRich Radio with DJ Scream on 105.3 The Beat ATL to discuss the role of District Attorney in a city’s government, how he gained interest in law and becoming a prosecutor as a youth in south Georgia, being mentored by Atlanta’s first black mayor, Maynard Jackson, his experiences during his tenure as Atlanta’s DA since 1996, and more. DA Howard reveals what he tells his own son about how to deal with police encounters, how concerned citizens can weed through false promises during election season, introducing expungement reform bill for first offenders, Rayshard Brooks, tension between Atlanta Police Department and the City of Atlanta’s District Attorney’s office, and much more!