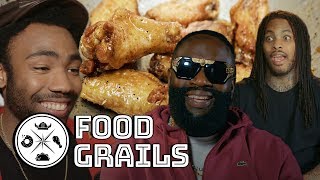 Welcome to Food Grails, First We Feast’s traveling food and culture series hosted by Miss Info. As a music journalist, she’s traveled the world and seen the power of artists who rep for their hometown sound. Now, she wants to discover how foods define a city’s flavor—from D.C.’s mumbo sauce to NYC’s beef patties. These are America’s food grails.

For the Food Grails season finale, Miss Info heads to Atlanta, a city that takes pride in its strip clubs, hip-hop, and wing culture. But talk to locals and you’ll quickly learn that one wing stands above the rest—lemon pepper. Natives have fiercely claimed lemon pepper as their own, turning it into an icon that’s been referenced in rap lyrics, television, and pop-culture. To find out why so many people have fallen under its spell, we head to strip clubs like Magic City, taste-test wings in backyard parties with Rembert Browne, and talk to some of lemon pepper’s biggest supporters, Waka Flocka, Rick Ross, and Donald Glover.

First We Feast videos offer an iconoclastic view into the culinary world, taking you behind-the-scenes with some of the country’s best chefs and finding the unexpected places where food and pop culture intersect.

WORLDSTAR HIP HOP VS LYRICAL LEMONADE VS RAPPERS OWN CHANNEL

WORLDSTAR HIP HOP VS LYRICAL LEMONADE VS RAPPERS OWN CHANNEL