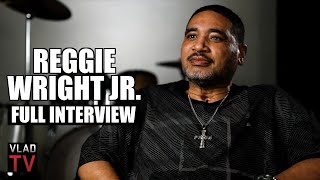 Reggie Wright came through for yet another VladTV interview, and this time around, he spoke about his battle with COVID-19, which he contracted in a halfway house after doing time in federal prison. Reggie then addressed the issues he has with his former podcast “Gangster Chronicles,” including claiming that he made nothing off of the podcast. From there, Reggie shared stories from his time with Death Row, including being present at the MTV VMAs during 2Pac and Nas’ tense confrontation, which was settled later that night. Reggie also shared why he thinks 2Pac was angry with Biggie, and he addressed Dr. Dre leaving Death Row after his former girlfriend and mother of his child, Michel’le, started dating Suge Knight. To hear more, including Reggie speaking about his house being raided over Biggie’s murder and how Suge Knight finessed Death Row masters from Interscope, hit the full interview above.